When I met 1st Lieutenant Iris Nigg Lundin, U.S. Marine Corps, to talk to her about her experience as a female Marine Officer in World War II, she handed me her prized possession from her service – her Aerial Navigator Wings. “I was one of the first 4 women to get these wings,” she said with well-deserved pride, “and I hope my story inspires young women to give the Marines a try.”

Iris just celebrated her 99th birthday in June. She was born in Minnesota, but grew up in Webster, Wisconsin, a town of about 600 people. She attended the University of Wisconsin in Superior, starting with a one-year scholarship for being the valedictorian of her high school class. She graduated with a four-year bachelor’s degree and began teaching school and working extra jobs during the summer. With World War II raging in the Pacific and Europe, Iris’s summer work in support of the U.S. war effort included operating a factory machine that inserted grommets into canvas pup tents.

After the law authorizing the U.S. Marine Corps Women’s Reserve went into effect, Iris heard the recruiting slogans “Uncle Sam Needs You” and “Free a Man to Fight,” and walked to a recruiting office. She wanted to be a Marine because the Marines had a top-notch image. On her way into the office, she passed two women on the street who asked her what she was doing. She told them she was going to enlist in the Marines. They said, “you must think you’re pretty good.” Their observation confirmed the Marines were right for her.

Iris enlisted in August 1943 and headed for boot camp in Camp LeJuene, North Carolina, right away. Her days consisted of training and learning about the Marines, including observing all of the training the men did so she would understand the Corps and its mission.

As part of boot camp, Iris also had mess duty. Iris’s first thought as she reported to her initial mess duty assignment was that she would be peeling potatoes all day long. When she got to the kitchen, she saw a machine in the middle of the room that looked like her mother’s Maytag washing machine. She assumed everyone working in the kitchen must get so dirty that they just washed their clothes before they left. Then she saw someone dump a sack of potatoes into the machine and turn it on. Forty seconds later, all of the potatoes came out peeled because the machine was lined with sand paper. Much to her surprise, Iris never peeled a potato in the Marine Corps. She concluded that inventions must be made by lazy people!

After completing boot camp, Iris was selected to go through Officer Candidate School, likely because she had a college degree. There she made friends with a brilliant and beautiful fellow officer candidate named Betty. Betty was fluent in multiple languages, including sign language. She was also a ventriloquist and could throw her voice, and on more than one occasion they had fun with Betty’s surprising talent at the expense of their unsuspecting Marine instructors.

Iris was commissioned a 2nd Lieutenant upon graduating from Officer Candidate School. She and three other women were sent on short notice to a Navy navigation school in Hollywood, Florida. Because it was a Navy school, Iris thought it would be ship navigation. But when she arrived, she found out it was aerial navigation. Her classes began the day after she arrived. Her training was intense – she had to quickly learn and master navigation by dead reckoning, radio, LORAN (long range navigation), and the stars. Some of her classes began at midnight and lasted until 8:00 a.m. Her star identification classes were held outside and she had to know 100 stars. She also practiced navigation on four-hour flights heading south over the Florida Keys. On one of these flights, she saw a capsized vessel that had apparently fallen victim to a German submarine just a few miles off the U.S. coast. She was amazed that the war was so close to home. She was told news about ships being sunk right off the U.S. coast wasn’t publicized out of concern people would panic. 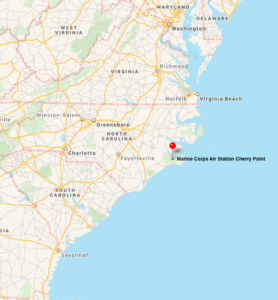 Iris and her three female classmates were the first four women in the Marine Corps to go through the necessary training and earn their Aerial Navigator wings. They were sent to Marine Corps Air Station Cherry Point in North Carolina to teach aerial navigation to Marine Corps combat pilots. Iris took her job seriously, because she knew men’s lives depended upon what she did. And, because she respected the pilots for willingly putting themselves in harm’s way whenever they flew in combat, she never wore her Aerial Navigator wings on base because they looked like pilot’s wings and she didn’t want any of her fellow Marines to think she’d qualified as a pilot. She did, however, wear her wings on her uniform off base because she wanted women to see what she had accomplished and learn that there were now doors open to them that had previously been closed.

The aerial navigation classes Iris taught, which included training rides with students up and down the East Coast in rickety twin engine Beechcraft airplanes “held together by bobby pins,” were for both new pilots and experienced pilots coming through Cherry Point for refresher courses. The most famous pilots Iris taught were from Major Pappy Boyington’s legendary Black Sheep squadron, made famous by their success in shooting down Japanese aircraft in the Pacific. Iris said they were the roughest and smartest guys to come through, but she goes out of her way to say that she was never given a hard time or told she couldn’t do anything because she was a woman. She said if you were competent at your job and worked hard, the men respected you and treated you like a Marine. She was proud of her students and continued to correspond with some even after the war.

Iris demanded that every Marine be treated with respect. She despised racism and segregation and on one occasion put several officers senior to her in their place when they put down an African-American steward working in the officer mess. Iris expected a backlash for her criticism of the senior officers, but there was none so she knew “they got the message.”

Iris remained in the Marine Corps until her discharge in December 1945. She married the love of her life, Bill Nigg, one week later. Bill, who remained in Minnesota during the war, proposed to Iris by mail. They had two children and were happily married for 38 years until Bill passed away in 1983. At one point Iris and Bill were adopted by a tribe in Nigeria after they opened their home for over two years to a young Nigerian man and his family while the young man studied at the Minnesota State University at Mankato. Iris estimates that approximately 2,000 tribe members from around the world attended the event in Nigeria. Iris remains close to the family’s children to this day. Iris remarried another wonderful man, Vern Lundin, seven years after Bill’s death, and they spent three-and-a-half years together before Vern passed away.

Iris has lived the Marine Corps ethos since the first day she put on a Marine uniform. She has the character and the courage to lead Marines, and she’s been a trailblazer for women in the military. She says if you are a young woman and willing to work harder than ever before and accept new things, the Marines will help open doors for you for the rest of your life. With more than a bit of Marine Corps pride she says, “when you meet someone else in a military uniform, you smile and maybe salute, but when it’s a Marine, you just stand taller.”

Voices To Veterans is proud to salute 1st Lieutenant Iris Nigg Lundin, not only for her wartime service in the Marines, but also for opening doors so others can follow.