Sergeant Dick Berg is the perfect veteran to lead off the Voices to Veterans Spotlight. Dick deployed to Vietnam during the height of the Vietnam War in 1967. Here’s Dick’s story. 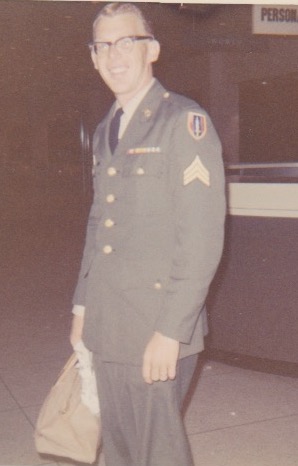 Dick is from Urbana, Illinois. He was drafted and entered the Army on April 20, 1966, and then spent the next eight weeks in boot camp at Fort Polk, Louisiana. Right after boot camp, he married his wife, Carol, and they drove off in July 1966 to Fort Gordon, Georgia, where Dick learned his Military Occupational Specialty, or MOS, which was Radio Relay & Carrier Operator. In layman’s terms, Dick set up and operated radio stations to enable battlefield communications.

It was a little unusual for a 19-year-old Private to report to Fort Gordon with his wife. It was even more unusual for this new Private to ask his First Sergeant, who is like a god to a brand new soldier, if he could live off post. Amazingly, with Fort Gordon overflowing with students living everywhere in tents, the First Sergeant gave Dick permission to live out in town. With the help of a hometown connection, Dick found a rental in the Hill section of Augusta for $75/month. At the time, Dick was making $100/month, but he also received another $100 because he was married. Carol got a job out in town and the Bergs enjoyed their stay in Augusta.

Dick completed his schooling in October 1966 and remained at Fort Gordon to await his first set of orders. They came in when he was on leave in November – he was to report to Fort Bliss, Texas. But because he was on leave, the orders were cancelled and later he received new orders – report to the Republic of South Vietnam.

Dick arrived in South Vietnam on February 21st, 1967. He was assigned to Company B, 43rd Signal Battalion. He initially reported to Qui Nhon, which is about 401 miles northeast of Saigon, or Ho Chi Minh City as it is called today. Company B was new and Dick was one of the first 8-10 members to arrive, so he had to wait there until his company grew to sufficient strength to carry out its mission. As they built their company base of operation, Dick’s principal responsibility was to set up a radio station on a hill in the countryside about 10 miles northwest of Qui Nhon, as well as other sites, as needed. 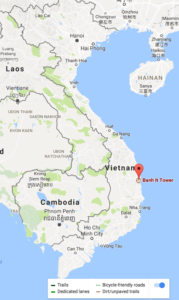 The hill was about 200 feet high and had an ancient monument, called Thap Banh It, on top of it. Dick put the antenna on the top of the tower and assembled the radio station on the grounds around the tower. Keeping this radio station up and running was Dick’s primary assignment until he departed Vietnam in February 1968.

Dick’s radio station handled tactical communications for U.S. units in Vietnam. There was another facility on the hill that had a direct line to Washington, D.C. Dick’s station was manned 24/7 by one person, usually on 10-12 hour shifts. One person also manned the other facility – so it was just 2 soldiers on this hill, pulling night shifts and manning it in all kinds of weather. During the summer, the temperature would reach a muggy 110 degrees, and during the winter, it would rain nonstop, making it impossible to stay dry. Plus, there were enemy Viet Cong all around, but fortunately Dick never came under attack. Perhaps it helped that there was a South Vietnamese camp at the base of the hill, or perhaps Dick was lucky that he got out of there before the Tet Offensive made the area hot. But he was always vigilant and always carried a weapon – he never knew when the situation might change.

Dick has many stories about everyday life in Vietnam that will resonate with veterans of all generations. I’ve picked just a few to show that you really need a sense of humor to survive in the military.

One of my favorites was when Dick’s new company commander, a spit-and-polish Captain who transferred from Germany, bought a fancy new color TV to use at the company’s base camp. He had Dick put a TV antenna up on the hill overlooking the camp, which required Dick to cut through the concertina wire around the camp to move the antenna and the cable up the hill. Once Dick got it all hooked up and the company commander turned on the TV, the picture was black and white. The company commander complained, “They told me it that it was a color TV.” It was – what they didn’t tell him was that stations in Vietnam didn’t broadcast in color.

On another occasion, Dick and a fellow soldier were on their hill drinking a beer and leaning against a guy wire securing a telephone pole. They were watching it rain up the valley about 30 miles away when lightning struck the radio station’s antenna on the monument. Not only did it zap the radio station generators, but also both men received a jolt through the guy wire. Miraculously, they were uninjured and they had the radio station back in operation within hours.

The final story involved the company commander lamenting how he’d put in the requisitions for lumber to build a barracks for his troops, but that he wasn’t getting any response. He’d tried to do this on his own, without going through his supply sergeant because he thought he’d have more success. When his supply sergeant heard this, he told the company commander to let him handle it. The supply sergeant collected 25 steaks, 50 chickens, and a bottle of Chivas Regal Scotch, and told Dick to drive at night to the port of Qui Nhon, where a ship was being unloaded. After finding the supply sergeant’s point of contact, Dick got his trucks in line and the lumber they needed was loaded from the ship onto their trucks. The three truckloads of lumber turned into a two-story barracks for 40 men. After that, the company commander relied on his enlisted leadership to get many jobs accomplished.

Sergeant Dick Berg returned from Vietnam in February 1968. He went on to graduate from the University of Illinois in Urbana/Champaign and raise a wonderful family with Carol. He credits his experience in Vietnam with helping him learn to work with all kinds of people – to listen to them – and to know what is important.

I interviewed Dick for about 90 minutes; I could have spoken to him for hours. In my opinion, Dick is an American hero and I salute him for his service. After we completed the interview, I presented Dick with a signed copy of Sapphire Pavilion, which is dedicated to Wounded Warriors and Vietnam War veterans, especially those heroes still waiting to come home. 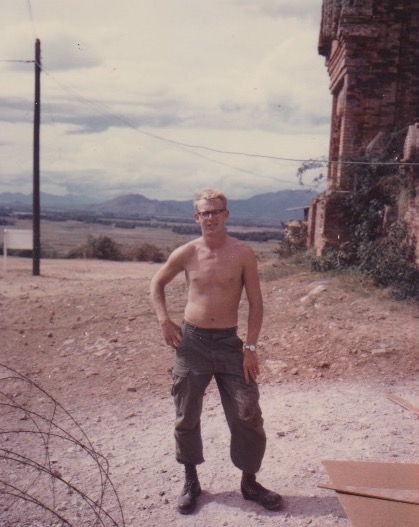